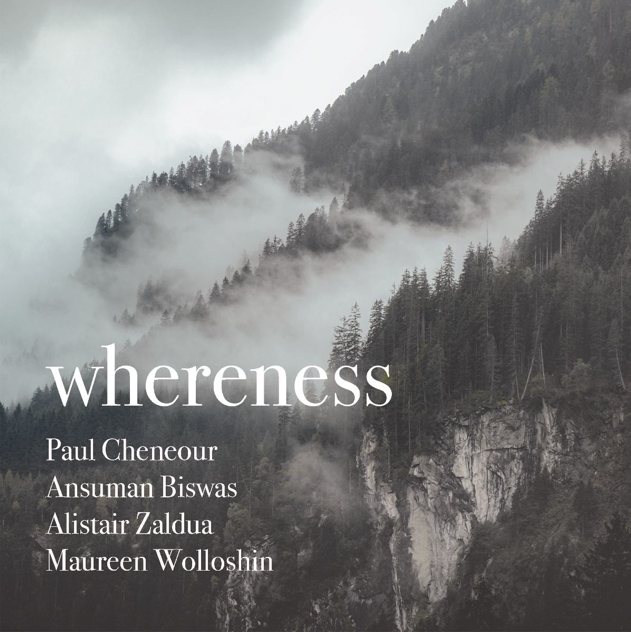 We are very happy to launch our new CD, called simply whereness, both as a digital release and as a CD. This has been published by Northstar Records who have already released many albums by Paul Cheneour. The link to the digital copy can be accessed by following this link.

This CD recording is a collage, or even a hybrid of several recordings made over approximately 6-8 months. It consists of recordings made as Trio CZW, of concert recordings made by Paul and Ansuman, and of a new set of recordings made especially., and as such, Paul Cheneour has been the main instigator for both the whole CD project, and whereness as a of free improvisers. The style of our playing reveals a large bandwidth of each of our musical backgrounds and current interests. As well as being classically trained, Paul also trained in Persian and Indian flute playing and improvisation. Maureen has a deep interest in Spanish-Arabic music, in Scottish Pibroch, and in graphic score writing. Ansuman is an Indian percussionist, trained both in the tabla and in percussion music from other cultures. Both Ansuman and Paul are deeply interested in meditation and in Yoga, and this is revealed in the wide range of approach and playing.

The collection of pieces that make the character of this CD so intriguing and compelling is, to my ears, that the listener is drawn in to believing the CD to be representative of a set of stylistic interests, only to have those expectations circumvented by the music that immediately follows. This is also a great part of how the CD is structured; decisions as to the order, the mixing, and the instrumental parts, were made by the whole ensemble as part of a gradual process.