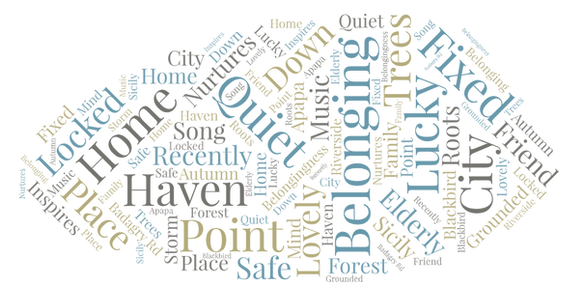 Last August I answered a call published via Sound and Music by the NW Live Arts Charity, simply called the #AsYouSayIt Project ; a full explanation can be accessed via that link. As their open website states: NW Live Arts is a charity producing concerts of professional classical and world music in community venues in North West London and beyond.

The details of the call were to send in simply thirty seconds of music as a sound file. This sound file should be inspired, or suggested, by the words contained in their word cloud. This word cloud was derived from an earlier call made in June for members of the general public to send in words that evoked a sense of place for them.

The plan was that a small team—comprising Neil Luck and some others—would select a group of sounds from the whole array of sounds sent and make a short piece out of that material. Luckily, my 30″ sound file was chosen and can be heard via this soundcloud link. Around this time I was developing a playing technique on the violin using 2 bottle-neck slides for use during improvisation. The sounds consist of this technique of violin playing and my very high whistling.

I thought this was a novel project where a final work is produced from a set of short sounds sent in via email. It guarantees that those taking part needn’t tax themselves to a great extent. There are several pieces of experimental music the concept of which involves that the performers create musical material that the composer had not created, and the performance is really an arrangement of the results of these contributions. I immediately responded to the call as it was an opportunity to try out my playing technique for a different context.