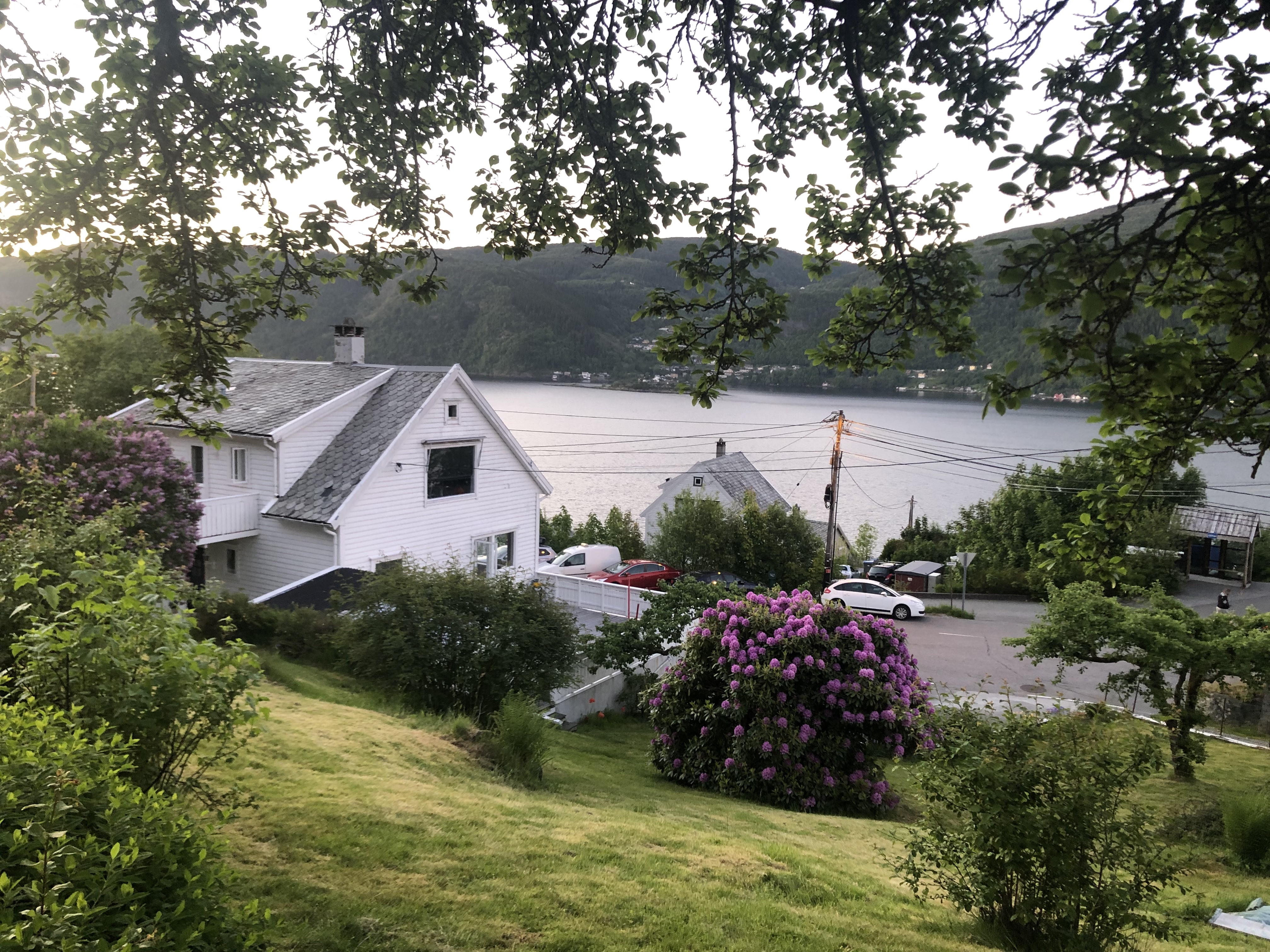 My 1-week long Neither/Nor residency is the culmination of a year-long project that was supported by the Arts Council’s DYCP (Develop Your Creative Practice) grant. Neither/Nor is based in Ytra/Arna, Bergen, Norway, and is run and curated by Thorolf Thuestad and Alwynne Pritchard.

The project was to develop my improvisation on the e-violin in combination with electronics. My main mentor, Alwynne Pritchard, based in Bergen, Norway, listened to and discussed my work remotely via the Jamulus software, and, at some point, we began improvising together. Short biographical details and a set of aims for the residency can be seen here on Neither/Nor’s website.

One of the outcomes of this project is a set of verbal scores that contribute to a set lasting roughly 30 minutes, comprising ideas that can either be developed as a soloist or in ensemble. My intention for the week-long residency was to focus on finalising this performance set for public presentation. This set would then be presented at two concerts: one house-concert (Wednesday 8th June), and another at Bergen Bibliotek (Saturday 11th June), organised by NyMusikk Bergen. During the residency I wrote a simple diary of how it progressed.

Morning rehearsal with Alwynne Pritchard. This rehearsal was to set up the mixing desk, loudspeakers, and recording for the concert on the next day, but also to get back to playing together. Since December we have developed playing as a duet, mostly with me presenting improvisation ideas to Alwynne (who then acted as a sounding board). These ideas were then tried out immediately both remotely (via the Jamulus software) and in person in our session in Manchester last May.

Visited the retrospective exhibition by experimental ceramics artist Nina Malterud at KODE Gallery. I was very impressed with the exhibition; in the video interview Nina Malterud explains her ideas, experiences and development as an artist, and comments on the works shown in the exhibition themselves.

Visited the Lene Berg installation at Bergen Modern Museum, for those interested, here is a review that provides more context.

For the house-concert, Alwynne invited a small group of around 12 close friends (a few of which are musicians). The general plan for the house concert was as follows:

The whole concert was a success, and I had some very interesting and stimulating conversations afterwards. The very final idea worked extremely well; I heard Polish, Spanish and, English read (no Norwegian!) individually and simultaneously in an array of different voices, accents and rhetorical delivery. The intimate setting allowed the spoken rhythms to interact in surprising ways. The seemingly random and layered sound of the multiple languages was inspiring to respond and improvise to. All three parts of the concert, and the discussions that followed, made for a very special and memorable event in an intimate and convivial space.

Later on traveled to Bergen to visit artist Kurt Johannessen at his studio.

I discussed his previous and current work with him and also my project. I was fascinated by his original thinking and how this has developed. Before this meeting I had been in contact with Kurt by exchanging emails both to arrange the date of our meeting, and to enquire about his book, About Thoughts. I was more interested in the Norwegian version of this book Om Tankar, which, since there are two forms of written Norwegian, was written in Nynorsk (‘new Norwegian’) as opposed to Bokmål (literally ‘book language’). The job of translating the book for me to understand it is also a creative act (rather than rely simply on the English version). We mainly spoke about his performance installations and the books he designs and makes, which are exquisite objects by themselves. In these books the pages often contain absurd, or even surreal and extremely humorous aphoristic sentences. Reality becomes redefined or reframed: Kurt’s usage of language – whichever language it seems – redraws the world.

This morning: practiced set for Saturday.

Later I visited the Wrap cultural centre to meet Leo Preston and learn about this fascinating and vital project that both he and his wife, Veronica Thorseth, have developed since 2000. This link navigates to a page that explains the creative and social aims for Wrap.

Kunsthuset Wrap is an interdisciplinary arts centre based in Bergen, and is housed inside what was previously a warehouse. Since moving to this site, Leo Preston and Veronica Thorseth have installed artist studios, a post-production room for film artists, various smaller rooms that function as artist studios, larger rooms for either concert or dance presentations, recording studios, a carpentry room, a room for spray-painting, and spaces for public concerts and dance presentation. The building has been redesigned to house artists of all disciplines to realise their projects during short residencies. The program for each season is curated and planned by Leo and Veronica, and, given how Leo described Wrap and the kind of events and artists they have had, both the building and its function is being constantly rethought in a way that maintains its experimentalism and dynamism.

On Saturday I performed at Bergen Public Library, during a concert series called Krapyl Biblioteksmusikken, organised by Bergen NyMusikk. These concerts are especially intended for a younger audience (accompanied by parents), even though they are open to all. Later in the day I had been told that the word ‘krapyl’ is a word that roughly translates as ‘little rascal’. Furthermore, the aim these concerts have is to allow young audiences to hear professional musicians perform their normal set, without being simplified or watered down. This is a great idea and I can’t think of an equivalent in the UK.

When I arrived the space was well prepared; I was able to work well with André, the sound technician and with concert moderator (and at times translator) Else, both of whom are part of the NyMusikk Bergen team. I very much enjoyed playing my set at this concert, the audience listened attentively throughout and I was made to feel extremely welcome throughout. This was a perfect way to begin a series of concerts that represent the culmination of my DYCP project and any work with Alwynne. How my project develops from here will be both as a soloist (at Access Space in Sheffield in September), and in trio concerts scheduled for 18th June, and 9th July where I will perform together with Franziska Baumann and Steve Noble.

Later on in the afternoon I attended the house concert performance of Gåologi by Eva Pfitzenmaier and Alwynne Pritchard. This was the final performance of 4, all of which took place in different venues (details), and was hosted by Teatergarasjen and was recorded for the New Music Show, BBC Radio 3.

Simply put, Gåologi is a work of psychogeography translated into a piece of music theatre and sound art and looks at human interaction with urban planning, and in particular about walking through the townships, villages and landscapes of the municipality of Bergen itself. The actual performance is the result of different processes that involved both Eva and Alwynne walking through Bergen, and writing/comparing journal reports. These reports contain everything from descriptions of the environment, to thoughts and memories during the walk, to personal anecdotes of people, objects, and environments encountered. After the concert Eva told me that she initially made as many notes as possible while walking or directly after it had happened. With subsequent walks her journal writing happened later, sometimes even with a gap of a few days; it wasn’t as difficult as she had imagined it would be to remember the multitude of details, but – importantly – it was necessary to be highly aware and conscious of surroundings, etc, as possible.

Once these journal reports had been examined, read through and selected from, an experimental piece focussing on walking and journeying emerged. In fact the final presentation is a hybrid of experimental music-theatre and concert performance. The performance space itself was full of instruments, and objects, and the performance consisted of a group of songs, autobiographical storytelling, audience interaction, and improvisation. Even a group of seemingly randomly chosen objects (a torch, an ornamental bicycle, an aqua-blue flask, etc) were shown to reveal their own stories. I identified several different narratives running throughout: the objects, the tape part, the many different instruments played, the autobiographical, and the collection of citations by authors who engaged with walking and journeying.

One of the strongest aspects of the house concert is its allowing for a more intimate engagement to the whole performance and the music, which I hadn’t considered before then. This was equally something I had noticed during my own house concert a few days previous. When listening to and engaging with this concert in these settings, I was far more aware of the many miniature details of the performance in a far more extreme way than in, for example, a concert hall, art gallery, or club. Potentially the house concert allows one to also engage with essential aspects such as how the instruments are played, and even the relationship to playing and sound making which contribute greatly to what is communicated.

Even though it was sad to leave, I did manage to see most of the performance of Ad Naturam by Kurt Johannessen at Galleri Christinegård.

The objects and characters in the room were: groups of large stones placed in each corner of the room, A series of hanging bushes suspended in the background of the main scene, a large open barrel in which a woman (Pavana Reid) was curled up in, surrounded by eggs (not actual real eggs), Kurt himself lying stomach down on the floor constantly sharpening pencils, and a further character (Jan-Egil Finne) who’s function – like a gardener – was to slowly and carefully pick up the eggs surrounding Kurt’s head on the floor, and place them inside the open barrel containing the curled up figure. The whole scene was strongly Beckettian, and absurd; the whole installation/performance was almost still, since almost nothing happened throughout, but was, at the same time, highly poetic.