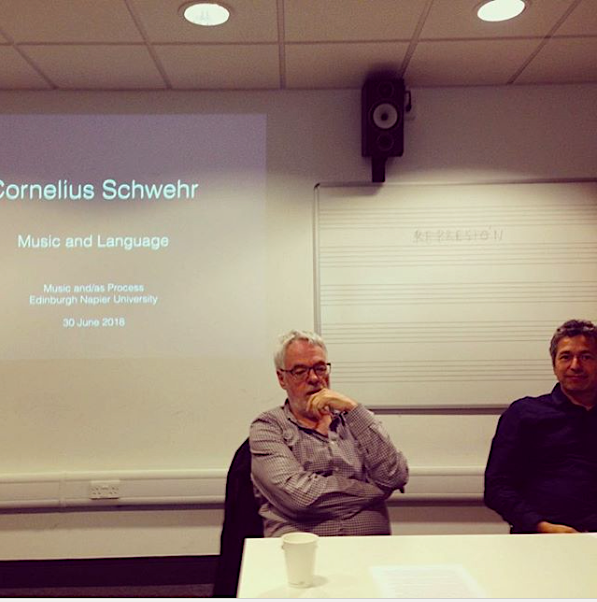 In October edition of Contemporary Music Review (Contemporary Music Review, Volume 39, Issue 3 (2020)), the theme was: Music and Language, and was edited by Lauren Redhead. The contributions were almost wholly drawn from papers delivered at the Music and/as Process conference that took place at Edinburgh Napier University in summer, 2018. During that conference, the composer Cornelius Schwehr delivered the keynote, also called Music and Language, my translation of which was projected onto the wall, while Cornelius delivered the lecture in German. In addition I interviewed the Swiss composer Annette Schmucki and so this article is called: Musik and Language Tilt Into Each Other.

As is stated in Lauren Redhead’s introduction, in German ‘Sprache’ means both language and speaking; both in Cornelius’ keynote and in the later article (there are slight revisions from the keynote to the article itself) he draws attention to the fact of how words in a sentence—as simple as ‘to make a virtue out of a necessity’—are placed in different orders depending on the language one is reading it in. While presenting his compositions and the thought at the centre of them, one of the main aspects is his concentration on meaning, and this is one of the main points at which Cornelius’ thinking diverges from Annette Schmucki.

In the interview I conducted with Annette Schmucki, Annette discuses her interest in both music and language as being of equal importance. In one key passage in the interview, Annette describes music as abstract, as for her it is an ‘unfocussed precision’, because it doesn’t have any meaning. Language, on the other hand, is described as a ‘focused precision’ in that although we all understand the word ‘table’, for example, we are also able to conceive of so many other variants of this image. Annette studied with Cornelius at Winterthur, Switzerland, before continuing her composition studies with Mathias Spahlinger at the Freiburg Musikhochschule. She has enjoyed a hugely successful career as a composer in Switzerland and beyond, and her work has been recorded and performed in countless international festivals for contemporary music.

Even though she was not present at the conference at Edinburgh Napier, her position became highly relevant for this journal edition. Her main interest is in decoupling the meaning from the words in the texts she uses, thereby rendering the language as a musical material by itself. This, as she says, is both an approach related to Oulipo based strategies, but is one that differentiates itself from Schwehr’s approach in that it is not as concerned with communicating meaning.

I really enjoyed the processes of translation, of working with Cornelius on his keynote, and on interviewing Annette specifically for this edition of CMR. I am very much looking forward to seeing how the ideas in both articles develop and continue to have a life of their own in the wok of other practitioners, composers, and researchers.