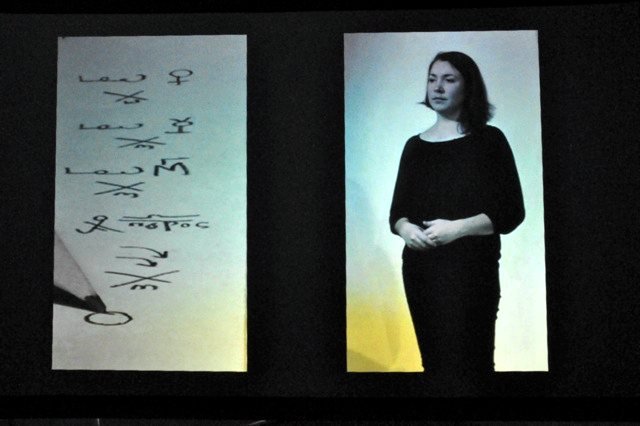 This audio/visual installation was commissioned by the Borealis Festival (Bergen) for the 2014 edition, the them of which was Alchemy. Around this time I had become increasingly interested in translation in my reading of Derrida, in reading Paolo Bartoloni in his reading of Giorgio Agamben’s short chapter on potentiality, I had also read Walter Benjamin’s seminal text on translation, and Roman Jakobsen’s equally important text that includes his now classical definitions of translation. Due to the theme of the festival I had intensified my reading alchemical texts, in particular Hermes Trismegistus’ seminal text The Emerald Tablet. For those interested in reading historical alchemical texts, Adam McLean’s website contains a large repository, some of which contain explanations.

Part of the issue I had with this literature is described in Mircea Eliade’s book The Forge and the Crucible, and in other compilations, is that some alchemical writing deliberately sets metaphorical traps that are easily identified by students of the authors of these texts, or by the initiated, but are almost impossible to follow for the uninitiated. The text I finally decided on, this being the most straightforward, was a book of some 55+ alchemical recipes, now identified as the Leiden Papyrus, found in Thebes dating back to the 2AD that was found (and eventually stolen) buried with its author.

I took between 15-18 of these short texts and subjected them to rather complex translational processes in order to derive short, minute-long pieces for improvising contrabass (performed by Adam Linson). I then asked Lauren Redhead to translate these recipes into British Sign Language. I then translated the recipes into the Ancient Greek alchemical sigils I could find (all of which were derived from Fred Gettings’ book: Dictionary of Occult, Hermetic and Alchemical Sigils) to create short formulae. To produce short, minute-long films I collaborated with the film-maker Adam Hodgkins who recorded my writing these formulae of sigils. In addition to his research and practice, Adam has worked extensively with the experimental cinema collective Exploding Cinema.

These processes produced a database of films of: Lauren’s interpretation of these recipes into British Sign Language, minute-long films of my writing the sigil formulae, and minute-long performances of the improvising contrabass pieces. Each category contained around 16 or 17 examples. The MaxMSP/Jitter patch I constructed randomly selects from different categories of film for each minute. Two films are selected and shown directly next to each other, and due to how the randomness has been set up there are sometimes Simon very interesting ways in which the two films correspond when placed next to each other. The fixed film version of this piece can be seen at the end of this blogpost.

The book chapter I wrote that was dedicated to this project describes the processes and methods of composing and realising this work, so, all I have written here are the bare outlines. Since Leiden Translations was exhibited at the Borealis Festival in 2014, it was shown at the Alchemy Film and Moving Image Festival in Hawick, Scotland, a year later, and was shown at the Music and/as Process conference held at Canterbury Christ Church University also in 2015.

A review of the whole festival, written by Harriet Warman, writing for the BFI, can be read here.